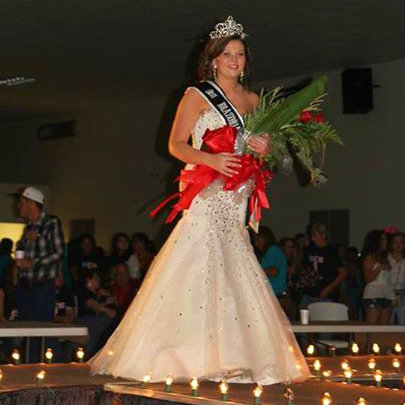 Senior Maddie Stickler walks the stage after being announced as the 2014 BCFA Fair Queen on Saturday night.

With Halloween right around the corner many young girls are preparing to transform into princesses for a day. For one senior, that dream became a reality Saturday night. Maddie Stickler was crowned BCFA Fair Queen, bringing her a whole new reason to be present at fair activities this year. Competing against eleven other candidates, one could say Maddie has not only been actively preparing for this moment for months, but really for the last several years.

“Representing Alvin High School as our BCFA fair queen candidate has been a dream of mine since I was 9 years old,” Maddie says. “I’ve loved every single part of this process. And when your dream for so long finally comes true, you don’t really look at anything as being “hard.” Twelve hard working and dedicated young ladies competed for one crown. So, if I had to choose one thing that was hard, it would be knowing that there was only one crown awarded to twelve very deserving girls.”

While being crowned may seem like the end of a long journey, many responsibilities lie ahead for Maddie as her reign begins. When we first tried to contact her on Sunday for an interview she had to postpone due to being “on duty at the fairgrounds.” Her job began immediately and will continue until she passes on her crown at next year’s coronation.

“This title, first and foremost, means being a positive role model and leader for the youth of our county. This week specifically it means volunteering to assist in all of the livestock shows, lamb, goat, steer and heifer, pet parade, senior citizen’s day, special children’s day, ag mechanics auction, and junior livestock auction, just to name a few,” Maddie says.

With hundreds of people in the audience holding signs and cheering for their candidate, awaiting the final name to be called, many of the girls on stage were noticeably emotional.

“As I was standing there waiting for the winner to be announced, it was very emotional for me personally,” Maddie recalls.  “I could see my parents sitting front and center smiling endlessly, I could hear my friends yelling my name and supporting me like they always do. I wasn’t really thinking about being named the winner. I was just overwhelmed with emotions and proud to be standing there representing not only my school, but my family and friends as well.”

Even in the end, when Maddie’s name was called, as the crowd of her family and friends erupted into cheers, she was momentarily in shock.

“The first thing that went through my mind when they called my name was “no way!” I couldn’t believe it. I remember pausing for a minute, like did they really just call my name? I could see them walking toward me with that beautiful crown and when Stephanie placed it on my head, that’s when it hit me that I had just won,” she says. “It was truly the most amazing experience of my life!”

Earning this title is more than a beauty pageant. The girls are scored in three categories including an interview with the committee panel, volunteer and community involvement, as well as the pageant portion of the event. Being an involved school and community citizen and showing signs of a great leader are as much a part in Maddie’s success as anything else. Having a panel of judges and committee members from across the county agree that your daughter has shown beyond a doubt that she is a role model for our youth would make any parent proud.

“We are most proud of Maddie for staying true to the person she is. The young lady standing on that stage is the same young lady we know and love every day. Maddie is a natural born leader and a role model to so many already and we are confident that she will continue to be those things during her reign as fair queen. It is an honor to call this beautiful young lady our daughter, ” Maddie’s parents said.

It is an honor indeed. As you visit the fair this week, look for Maddie helping in the various events and make sure she knows that Alvin High School is proud of her accomplishments.